Moria camp was home to some 13,000 people - more than four times its stated capacity. Experts and aid workers have long criticized the cramped and unsanitary living conditions at Moria, which make physical distancing and basic hygiene measures impossible to implement, even at a time in which the first coronavirus cases are being reported.

The cause of the fire is unclear. Thousands of men, women and children are now without accommodation and Greek authorities are struggling to find them shelter.

Pope Francis visited the camp, that is almost burnt to the ground, during a 1-day visit to Lesbos in April 2016. He took the opportunity to express his closeness and solidarity to the refugees and to call for urgently needed EU asylum-seeker policy reform.

Cardinal Jean-Claude Hollerich, President of the Commission of the Bishops’ Conferences of the European Union (COMECE) told Vatican Radio that Europe’s identity has gone up in flames together with the camp and that a common European policy for refugees is long overdue.

Cardinal Hollerich described the fire as “a shame for Europe” because it’s not only the camp that is on fire but the very identity of the old continent. 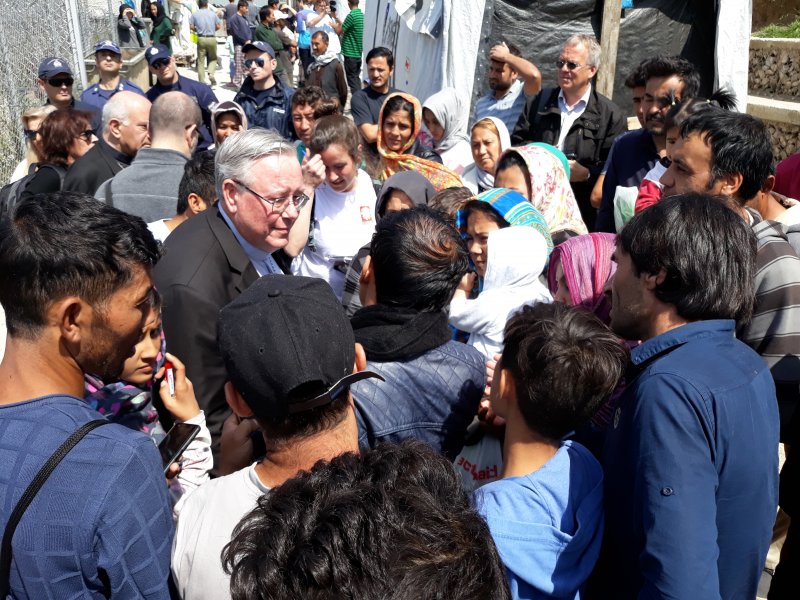 He pointed out that the people who find themselves stationed in Lesbos came to Europe in search of help, and that we Europeans have abandoned them “in their distress on the small Greek island” with “many words but no deeds.”

“I think Europe should be ashamed because this [fire] is the result of the despair in the heart of the people,” he said.

The Cardinal recalled a personal visit to Moria camp together with the Pope’s Almoner, Cardinal Konrad Krajewski. He said on that occasion they had the chance to speak to the people: “we heard this deep despair in their hearts.”

“Darkness,” he continued, “has come into the hearts of these people, and I think the fire is a consequence of that attitude. An attitude that is fuelled by our inaction.”

In order to prevent and avert human and humanitarian disasters such as this, Cardinal Hollerich expressed his belief that what is needed is a common policy on the part of the European Union for refugees and asylum seekers.

He said he is aware that the German Presidency is working in this respect but that all Europeans need to take responsibility.

“We cannot claim the Christian roots of Europe if we let people down in their despair, he said.

The Cardinal singled out Italy, which has accepted many refugees from Moria in the past few years thanks to the humanitarian corridors set up by the Community of Sant’Egidio in collaboration with Italian authorities.

“If Italy, a country with a lot of problems due to the Covid pandemic, can accept so many people, why can’t the rich countries of Europe not do more to help the refugees?” he asked.

Cardinal Hollerich concluded saying his is an appeal “to the northern countries, the rich countries, to accept more refugees.”

And, he continued, Churches across Europe are also called to react more decisively.

Acknowledging the fact that Church incomes have dropped dramatically due to the Covid-19 pandemic, and asking for support for the Community of Sant Egidio that has done such good work in Lesbos," he pointed out that “sharing does not mean only to give in times when we are very rich, but sharing means to share even if you have become poor.”