Until present, the Octave, the pilgrimage to the miraculous image of the Consoler of the Afflicted in the Cathedral of Luxembourg, is one of the essential pillars of Luxembourgish popular devotion.

The origins of worship of the Consoler of the Afflicted during the time of Fr. Jacques Brocquart (1660), a Jesuit, are ingrained in the same idea of the pilgrimage. As history states, on December 8, 1624, on the Feast of the Immaculate Conception of Mary, Fr. Brocquart, accompanied by students of the Marian Congregation of the fairly new Jesuit middle school of the city of Luxembourg, carried a statue of Mary in the procession, sculpted in linden wood, representing her as the Woman of the Apocalypse, standing majestically on a crescent moon, until reaching ground clear of fortifications, the “glacis” (mound), where it would henceforth be venerated. 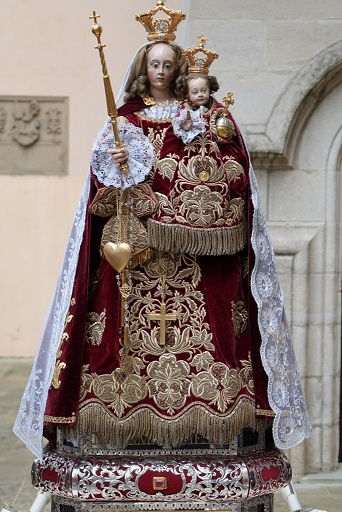 Since 1625, pilgrims or groups of students have come to visit the image of the Consoler of the Afflicted, which was placed in the chapel that was built on the terrain of the “glacis” before the doors of the fortified city and that was consecrated in 1628 as a pilgrimage chapel. Already in 1639, the first “book of miracles” mentions answered prayers and healings before the miraculous image in the chapel of the Glacis.

Because of the growing popularity of the invocation of the Consoler of the Afflicted among the people, a full week of pilgrimage was initiated for pilgrims the same year, which effectively formed the basic structure of the festivities of the Octave today.

Indeed, for the first time, because of the large number of pilgrims, this year the statue of the Consoler of the Afflicted will be moved to the church of the Jesuits (today the Cathedral) situated inside the city, for eight days and then during a solemn ceremony, it will be returned to the chapel of pilgrims on the “glacis”.

This local pilgrimage rapidly became an important facet of popular devotion of the city, of the country and of the entire region. In 1666, the Mother of God became the patron saint of the city of Luxembourg. In 1678, she was chosen as the national patron saint of the Grand Duchy of Luxembourg. Still today people from different regions of the former territory of Luxembourg go on pilgrimage to Notre Dame. Incidentally, a statue of the Consoler of Luxemburg has been venerated in Kevelaer, in Germany, since 1642.

After important restoration procedures that came to a successful conclusion in the autumn of 2008, the geographic origin of the statue of the Consoler of the Afflicted could be scientifically identified as Cologne, also in Germany.

Since 1921, the annual period of pilgrimage has been set at two weeks, namely from the 4th to the 6th Sunday of Easter.