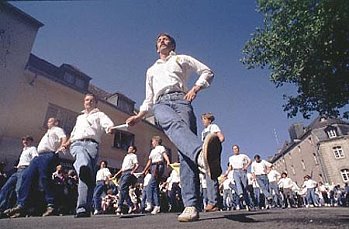 Soon after the death of Saint Willibrord, founder of the Abbey of Echternach, many pilgrims went to the grave of this Anglo-Saxon missionary. The first document mentioning the dancing pilgrims in Echternach, named the “Dancing Saints”, dates back to 1497. Some would trace the dancing procession to the christianization of pagan customs.

Who introduced the dance?

It now seems fairly certain that the dance appeared in the “banal” processions. The parishes belonging to the abbey were required to come in the days of Pentecost, with crosses and banners in Echternach in order to deliver their charges (wheat, wax, silver etc). In a text from the 16th century it is clarified that pilgrims from Waxweiler (D) conducted a dancing procession in Echternach. Other groups joined them later.

Pilgrims jump from one leg to the other while moving forward. The melody of the procession began as a simple folk tune that could be played on current instruments of the region (flute, fiddle, drum). In the version of 1850 made by a musician of Trier, one can recognize the air of the popular song “Adam had 7 son.” With time the melody was enriched. It now looks like a polka.

We can see in the dancing procession the joy of living, but also a fervent prayer of people tried by suffering. Saint Willibrord being invoked against epilepsy, some claim that the dancing is imitating the behaviour of an epileptic in order to pray the Saint to intercede with God to protect the pilgrims from the disease.

Tuesday of Pentecost, after the Pontifical Mass in the Basilica, the Archbishop of Luxembourg makes a speech from the top of the stairs of the court of honour of the ancient abbey. The singers lead the procession by invocations to Saint Willibrord; followed by groups of pilgrims from the Netherlands, Lower Rhine and other areas where Saint Willibrord is venerated. The procession passes through the city, participants then dance through the church to the crypt, pass before the tomb of Saint Willibrord and then disperse in front of the basilica. The celebration ends with an eucharistical salute in the sanctuary.

Tens of thousands of spectators watching the annual procession involving every time some 1.500 musicians and 8.000-9.000 “Dancers”.